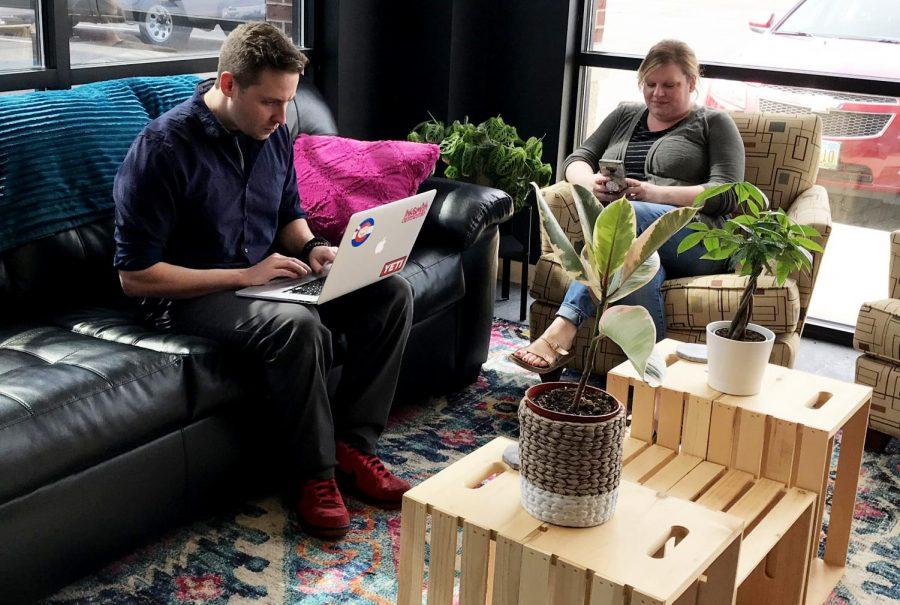 The interior of Inkwell graphics beg you to start creating something.

The store, just off College Corner Pike near Walmart, smells strongly of ink and wood. Its black-painted walls are adorned with T-shirts, and plants dot the windowsills.

It is operated by James Hamblin and his aunt, Chrystal Matix, both born and raised in Oxford.

Hamblin graduated from the Art Institute of Cincinnati in 2005. Eager to do anything that would allow him to use his art degree, he worked in several screen printing stores before deciding to open his own.

“I just went on Craigslist and bought some used screen printing equipment,” he said. “I did it in my garage and then I built as many customers as I could.”

When Hamblin started taking care of the orders, he started to think about getting help. Realizing that the garage was not the best place to hire employees, he moved the business to its current location.

Matix had separately started his own vinyl business, mainly creating window decals. She and Hamblin decided to join forces soon after.

“Fortunately, we get along well,” said Matix.

“Yeah, well, we grew up together so we already knew each other’s boring qualities,” Hamblin said.

In fact, the only adjustment Hamblin needed was getting used to the increased amount of glitter in the store.

“At the end of the night you come home and you change and you look and it’s like you have glitter all over the place. And I’m like, why didn’t anyone say anything? Hamblin said. “You know, I’ve been a lot prettier since Crystal has been here.”

“The store too,” Matix said.

Hamblin and Matix are both passionate about small businesses in Oxford and eager to help other entrepreneurs.

“I want people who have a passion for print or art,” Hamblin said. “If you want to come and learn how to do it, I want to be able to show you the process from start to finish so you can see what’s being done. There is no wizard behind the curtain.

“Between us, we know a lot of people so [the community] is something we really care about. We want to see other people succeed and hope that they will also help us be successful, ”said Matix.

Matix, a Girl Scout troop leader, with two daughters who are scouts, brought a troop to learn about the printing process.

“We opened the store on a Saturday so that they could come and learn how to screen print. I gave them three different models so they got to see the whole process, how to do it, and they thought it was super cool, ”she said.

The store helps a number of local fundraisers, making jerseys for local sports teams and designing jerseys for events like the Walk Against Leukemia and the recent Taylor Metcalf Memorial Hockey Tournament.

“I want them to be able to fundraise,” Hamblin said. “I mean, I might not have deep pockets, but if I can give them the best possible price on shirts, I’m more than willing.”

One of Hamblin’s favorite recent projects was that of an English teacher at Talawanda High School whose student created a snake design based on Hamlet.

“He wanted to wear it while they read Hamlet, and the design went really well. I mean, I love taking someone’s artwork and being able to put it somewhere so they can wear it every day, ”Hamblin said.

Matix and Hamblin are currently gearing up for their next local event: a table at the Oxford Wine Festival on June 1.